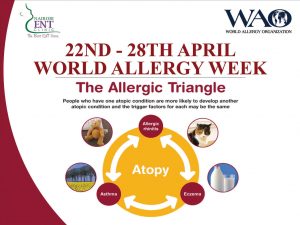 What is allergic rhinitis?

Allergic reactions occur when the body over reacts to harmless molecules. The most common respiratory allergy is allergic rhinitis. Allergic rhinitis causes a variety of annoying symptoms, including sneezing, itching, nasal congestion, runny nose, and post-nasal drip (the sensation that mucus is draining from the sinuses down the back of the throat). It may also manifest as an ear itch or palatal click (itchiness of the roof of the mouth).

Although not life threatening, allergic rhinitis has a negative effect on quality of life, sleep, work productivity and school performance.

Who gets allergic rhinitis?

Allergic rhinitis can begin at any age, although most people first develop symptoms in childhood or young adulthood. The symptoms are often at their worst in children and in people in their 30s and 40s. However, the severity of symptoms tends to vary throughout life; many people experience periods when they have no symptoms at all.

What are the causes of allergic rhinitis?

Allergic rhinitis is caused by a nasal reaction to small airborne particles called allergens (substances that provoke an allergic reaction). In some people, these particles also cause reactions in the lungs (asthma) and eyes (allergic conjunctivitis).

What are the symptoms of allergic rhinitis?

The symptoms of allergic rhinitis vary from person to person. Although the term “rhinitis” refers only to the nasal symptoms, many patients also experience problems with their eyes, throat, and ears. In addition, sleep can be disrupted, so it is helpful to consider the entire spectrum of symptoms.

When an allergen is present year round, the predominant symptoms include post-nasal drip, persistent nasal congestion, and poor-quality sleep.

How is allergic rhinitis diagnosed?

Diagnosis is largely based on clinical symptoms and physical examination.

Identifying the allergen and possible triggers is possible.

Medical test may be ordered to confirm the diagnosis.

Skin prick tests are complimentary and utilized if the allergen is unknown.

What are the treatment options of allergic rhinitis?

A multifaceted approach including control measures like avoidance of exposure and triggers as well as medication is used. Single measures are commonly ineffective to control the symptoms in most people.

The right treatment for you will depend a lot on your symptoms and other health problems. Combination of medication is often used to provide for optimal relief especially in severe symptoms.

What if I want to get pregnant?

If you want to get pregnant, talk with your doctor about which medicines are safe for pregnant women to take. Persistent allergy symptoms can get worse, get better, or stay the same in pregnant women.

The content on the Nairobi ENT website is not intended nor recommended as a substitute for medical advice, diagnosis, or treatment. Always seek the advice of your own physician or other qualified health care professional regarding any medical questions or conditions.